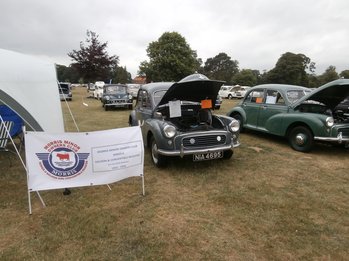 Hello my is Nia. Although I'm not a CKD I was once destined for export.  Where I now live in Wales, Nia is a strong Welsh girls name.  I quiver on my tyres when I go west, as I'm often asked how much to buy my No. plate. Never not for sale they are told.

​ I was built around the 25th of October 1954 and from what I can remember I was fitted with the hot climate pack.  I have a four bladed cooling fan, a lower rated thermostat and an A C vertical oil bath air filter.  The filter and fan remain however the thermostat is more suited to the UK.  I can only think I was destined for hotter climates.  For some reason my designation changed in production, I was left with the climate pack and my export designation removed and I was given a home market No.

A short while after being built I was transported to Liverpool and sent to Northern Ireland, so I suppose I did go overseas.  I arrived at Thomas Corrie and Sons in Antrim around the 11th of November 1954.  To my surprise I had already been sold to the local Doctors practice.  I was parked outside again cold wet and untouched.  Then a nice man from the garage came out patted me and said 'your turn next'.  In the garage I went , this nice man went all over me top to bottom and back to front.  A little tweak here a little twist there a little drop of oil here and there, then a polish all over.  I was collected by Miss Eimear Murray the local district nurse who used me for the next five years.

​I was traded in on the 1st of December 1959 with a broken gearbox.  I was repaired and bought by one the Doctors and used me as his car until 1972.  I was laid up until early 1980. I was bought by someone from Scotland. However I could not leave yet.  My old owner hadn't re-registered me in the registration changes in 1970.  My original No. didn't exist on file and wasn't valid so was given a new No. NIA 4695.

​I was used and abused when I got to Scotland, and after a few years I was sold again to someone in Cumbria who restored me.  I was sold again in 1991 to my present owner.  I was loved and cherished went out on Sunday drives and taken to shows, until June 1993.  My bottom started to get a bit saggy on the way to the national rally.  My garage partner a 1968 Austin Pick-Up held my quarter light and followed me to the show.  I almost made it home until I saw the Humber Bridge, my saggy bottom went completely with a big rumble.  My garage partner came to my rescue and towed me home.

​I moved to Wales with my present owners in 1998, with a wooden create marked Morris.  I was laid up until 2010 when I was fitted with a new factory engine.  I've been undergoing gentle restoration ever since.  One day I'll be back to that gleaming new pin outside the showroom.